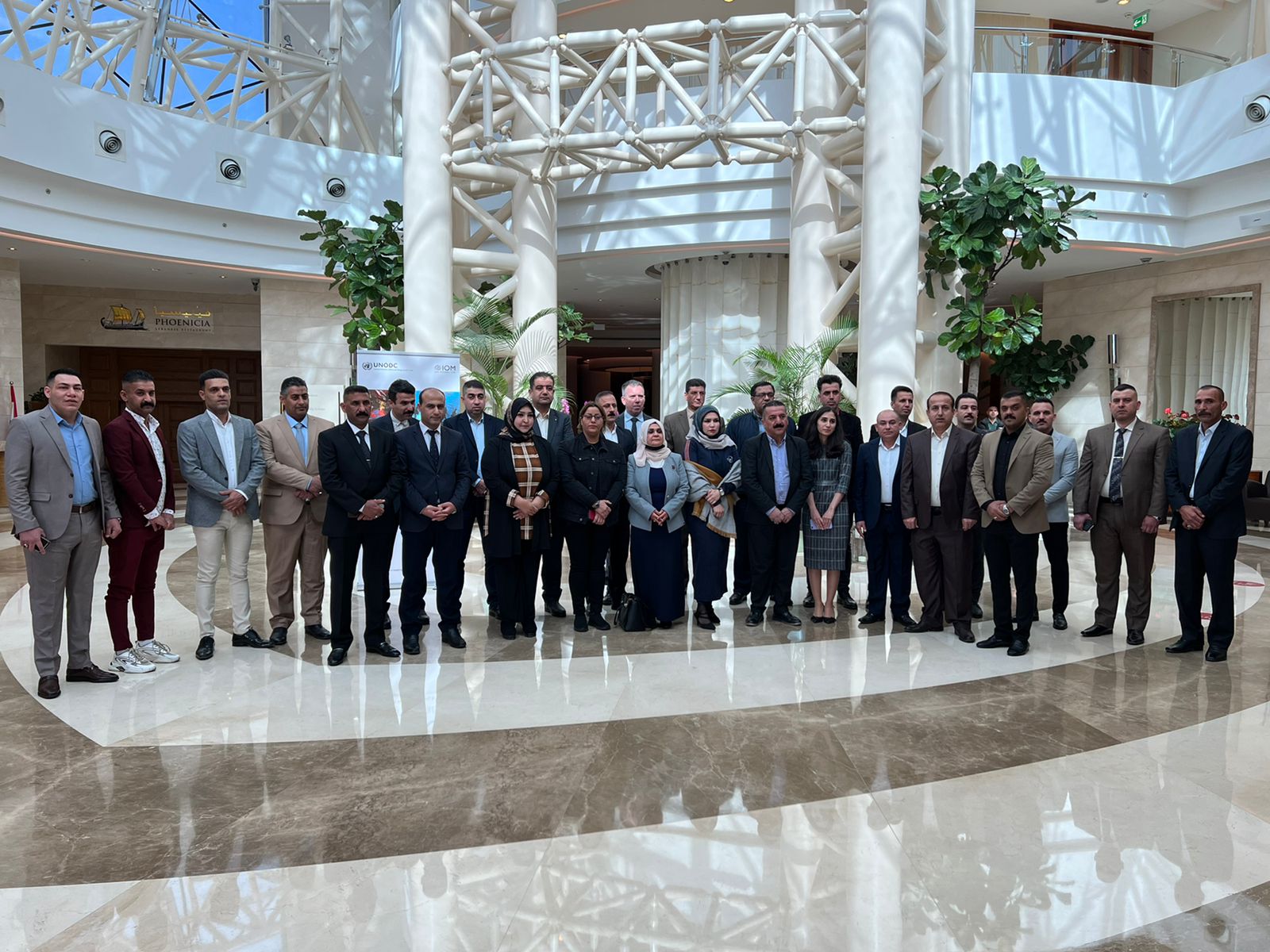 Sulaymaniyah, KRI – 28 March 2022– The second of a three-part series of training for police and judicial investigators on the “Investigation of Trafficking in Persons and Smuggling of Migrants” took place from 14 to 18 March 2022 in Sulaymaniyah, Kurdistan Region of Iraq (KRI). 29 officers from Baghdad, Diyala, Salaheddin, Anbar, Al-Qadisya and the Kurdistan Region attended the 5-day training, which focused on the skills necessary for successful investigations that uphold human rights for both victims and suspects.

Opening the workshop, General Aso Shaikh Taha, Chief of Police, Sulaymaniyah, stated, “trafficking in persons and the growing phenomena of migrants smuggled from Iraq are two dangerous crimes that we need more cooperation on. We are thankful to UNODC and programs like GLOACT for strengthening our staff’s capacity to better understand the nature of these crimes and how to combat them. And in our role, we say to UNODC and any other UN organization that wants to support us, you are welcome to work here, and we will support you in implementing your projects.”

The content of the course focused on the examination of international and national legal standards, understanding how trafficking affects its victims, good interviewing techniques with both suspects and victims, international law enforcement cooperation, and a presentation of the perspective of victims of trafficking. His Excellency, Generoso Calonge, Ambassador of the Philippines, joined the session on increasing understanding of the trafficking victims’ perspective. He talked about the challenges and risks victims face in Iraq. Meanwhile, GLO.ACT implementing partner IOM presented a victim testimony of an Iraq trafficking case. On the final day, a session on the rights of suspects was delivered by Judge Mohammed Salman, Al-Rusafa Criminal Court, Baghdad.

Throughout the training, the cross-cutting issues of gender equality and respect for human rights were given centre stage. A session on dealing with child victims and other vulnerable groups, including people with different sexual orientations and gender identities (SOGI), was presented by Zubaida Shakir, GLO.ACT National Project Officer, Iraq. The session challenged some misconceptions about the law and how to deal with vulnerable groups within the interviewing process. Participants were encouraged to recall good international practice when dealing with children found in situations of exploitation and to ensure that the rights of suspects are fully respected throughout the criminal justice process.

Throughout the training, there were frequent references to the Iraqi trafficking law, the criminal procedure, and the penal code.  Interview skills were practised using adult drama students playing the role of victims of trafficking. The victims’ perspective was presented by playing an audio testimony provided by a female survivor of trafficking who had previously been trafficked for the purposed of domestic servitude in Iraq.

The third of the three-part training is scheduled for June 2022.

This project is funded by the European Union.

The Global Action against Trafficking in Persons and the Smuggling of Migrants – Asia and the Middle East (GLO.ACT-Asia and the Middle East) is a four-year (2018-2022), a joint initiative by the European Union (EU) and the United Nations Office on Drugs and Crime (UNODC) being implemented in partnership with the International Organization for Migration (IOM) in up to five countries: Islamic Republic of Afghanistan (Afghanistan), Islamic Republic of Iran (I.R. of Iran), Republic of Iraq (Iraq), Islamic Republic of Pakistan (Pakistan). GLO.ACT-Bangladesh is a parallel initiative also financed by the EU and implemented with IOM.

The project builds on a global community of practice set in motion in GLO.ACT 2015-2019 and assists governmental authorities and civil society organizations in targeted, innovative, and demand-driven interventions: sustaining effective strategy and policy development, legislative review and harmonization, capability development, and regional and trans-regional cooperation. The project also provides direct assistance to victims of human trafficking and vulnerable migrants through the strengthening of identification, referral, and protection mechanisms. The project is fully committed to mainstreaming Human Rights and Gender Equality considerations across all of its activities.