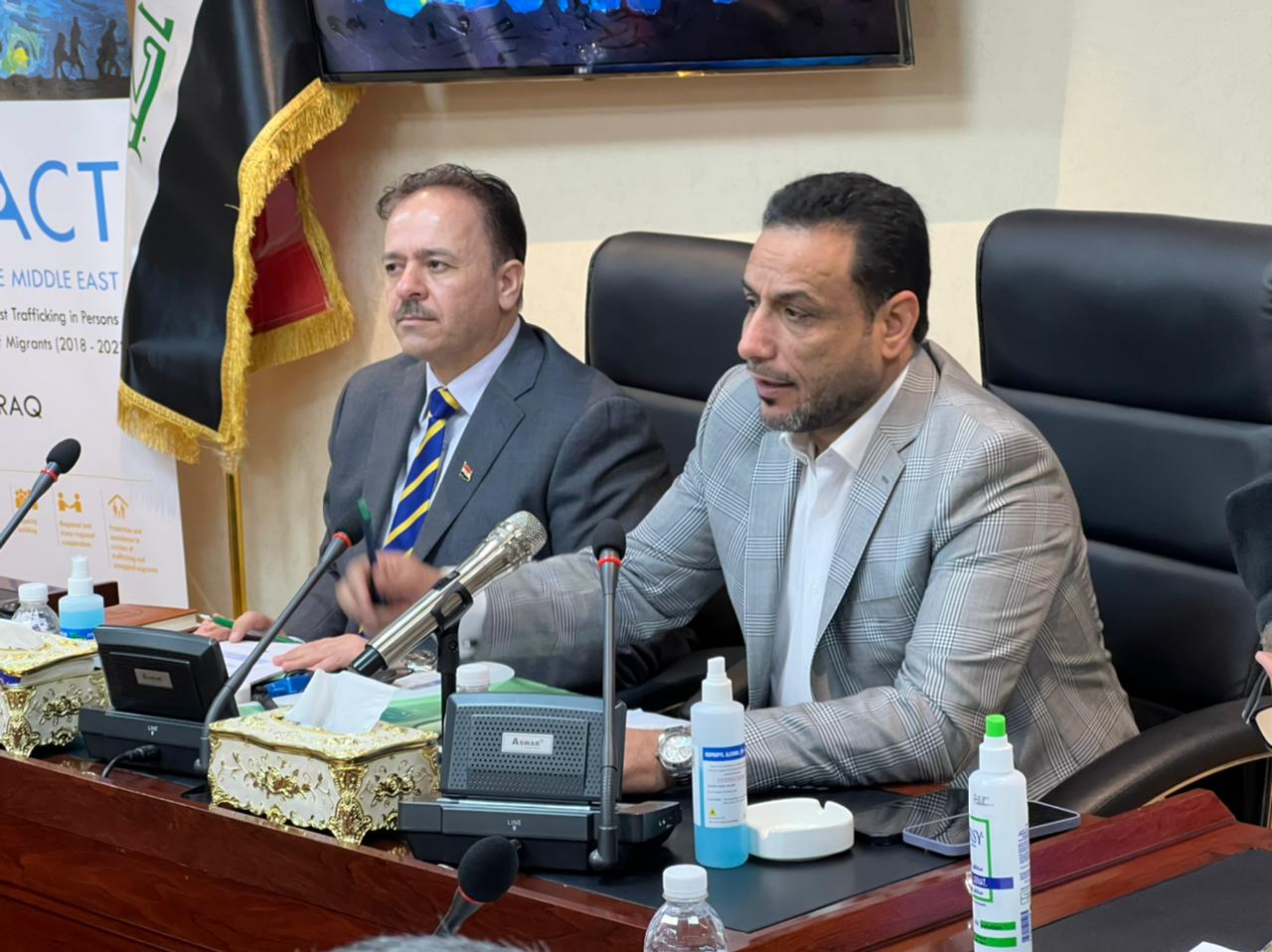 Baghdad, Iraq – 20 April 2022 – The issue of migrant smuggling and how best to address this crime has gained momentum in Iraq. To support Iraqi counterparts UNODC, under the framework of GLO.ACT Asia and the Middle East organized workshops bringing together diverse stakeholders to identify pathways likely to facilitate the drafting of national legislation on the smuggling of migrants (SOM). After the workshops, UNODC began further coordination with the State Council to support the law’s drafting, forming a drafting committee.

On 27 March 2022, GLO.ACT organized the committee’s first meeting, tasked with drafting national legislation to address migrant smuggling in Iraq. The aim of the meeting, held at the General Directorate of Training and Qualifications and attended by the committee members and other experts on legislation and international cooperation, was to initiate the work on drafting the law and agree on a workplan for the drafting process.

Meeting participants agreed that strengthening Iraq’s response to migrant smuggling is in the interest of Iraq and destination countries. They also highlighted the importance of identifying and including solutions in the legislation and having an action plan supporting sustainable reintegration. During the discussions, committee members further pointed out the need to increase legal pathways for migration.

Taking committee members through the many steps entailed in legislative processes was Counsellor Dr Mazin Radhi Lilo, while Martin Reeve, UNODC GLO.ACT Regional Advisor spoke about Iraq’s ratification of the United Nations Convention against Transnational Organized Crime and presented on the Protocol against the Smuggling of Migrants by Land, Sea and Air.

Chairperson of the drafting committee, Jasim Atiya, Deputy Minister, Ministry of Migration and Displacement (MOMD), chaired the first meeting. In addition, Burhan Mizher, Deputy Minister of Justice, also attended as well as senior officials from the Ministry of Interior, representatives from the Higher Judicial Council and the Iraqi Higher Commission on Human Rights.

Looking ahead, the GLO.ACT team will continue its coordination with the committee and stakeholders in the Kurdistan Region of Iraq to ensure a unified vision and agreement on a draft as soon as possible.

This project is funded by the European Union.

The Global Action against Trafficking in Persons and the Smuggling of Migrants – Asia and the Middle East (GLO.ACT-Asia and the Middle East) is a four-year (2018-2022), a joint initiative by the European Union (EU) and the United Nations Office on Drugs and Crime (UNODC) being implemented in partnership with the International Organization for Migration (IOM) in up to five countries: Islamic Republic of Afghanistan (Afghanistan), Islamic Republic of Iran (I.R. of Iran), Republic of Iraq (Iraq), Islamic Republic of Pakistan (Pakistan). GLO.ACT-Bangladesh is a parallel initiative also financed by the EU and implemented with IOM.

The project builds on a global community of practice set in motion in GLO.ACT 2015-2019 and assists governmental authorities and civil society organizations in targeted, innovative, and demand-driven interventions: sustaining effective strategy and policy development, legislative review and harmonization, capability development, and regional and trans-regional cooperation. The project also provides direct assistance to victims of human trafficking and vulnerable migrants through the strengthening of identification, referral, and protection mechanisms. The project is fully committed to mainstreaming Human Rights and Gender Equality considerations across all of its activities.