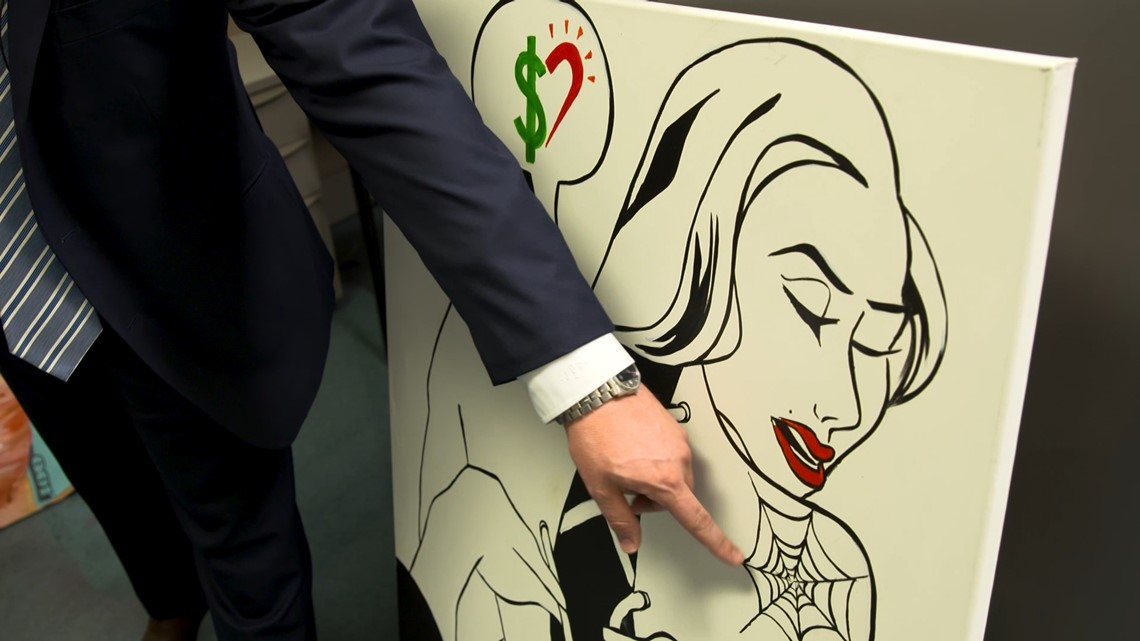 In August 2018, Wayne Bearden called the Plano Police Department to report a robbery at his house.

When officers arrived at Bearden’s home to file a report, they noticed a few things.

First, they saw that there were multiple guns in his house.

Then, as they continued to investigate, they discovered that Bearden was a convicted felon — meaning he was not lawfully able to own those guns.

The Department of Justice report that was released after Bearden was sentenced in 2021 says that he eventually pleaded guilty to possessing firearms as a felon — as well as to additional charges of coercion, enticement and aiding and abetting.

He was sentenced to 15 years in prison.

But this story isn’t that cut and dry. There’s plenty more beneath the surface.

The DOJ report also included the details of the operation that Bearden was running. It explained the roles that three other women — all of whom were also charged — played in his operation.

Then there’s the matter of the curious paintings police found in Bearden’s home.

Chapter 1: The Culture of Trafficking

“It’s in plain sight,” Perez said of the signs of sex trafficking that exist all around us. “You see it every day. You just don’t know what you’re looking for.”

It’s his job to look and really see.

He said one of the things that tipped off officers about Bearden — in addition to his guns — were the paintings hanging on the walls throughout his home.

Perez still keeps a number of those paintings in his office to use for educational training purposes. Others sit in the U.S. Attorney’s office as evidence.

“Then some were so graphic we just had to destroy them,” Perez said.

There were about two dozen in all. The paintings are all on large canvases, and they featured images of different aspects of what Perez describes as a trafficking culture.

One of the paintings shows a woman’s bare back as she lies face-down and gripping a chain running between what appears to be feet belonging to a man standing over her.

Another painting shows a forest with a sign that reads “choosing season” and features someone hiding behind a tree in the shadows.

“‘Choosing season’ is something these targets and traffickers talk about, where a victim of trafficking will choose their trafficker,” Perez said.

Other paintings showed a woman handing a man cash, a view of the Dallas skyline with “Wayne B” painted onto a road sign and images of women being sexualized and in positions of weakness. Multiple paintings showed a man’s shoes or wrist, always featuring designer lookalike accessories.

“These traffickers are usually really well-spoken,” Perez said. “They’re really eloquent, and they bring this promise of grandeur.”

During his investigation, Perez said he learned that Bearden’s victims said they “chose” him because he was less abusive than their previous traffickers, who raped or severely beat them when they didn’t make their quota.

“This trafficker was less violent,” Perez said. “If [his victims] didn’t make their quota, he wouldn’t beat them as bad.”

Chapter 2: A Story More Common Than You Might Think

“That allure is that ostentatious, that fancy lifestyle,” said Charleston, herself a survivor of trafficking. “That’s what sells to victims, and they think they’re going to get to keep those things”

Charleston was a teenager when she met her trafficker.

She’d ran away from home and met what she presumed to be a “nice guy.” It took just two days for that notion to fall apart.

“He told me to get in the car with the other two girls, and they would show me the ropes,” Charleston said. “I found myself in the backseat of a car on Harry Hines Boulevard at 17 years old, being told exactly how to ask people to have sex with me, and exactly how much money I had to charge them.”

Charleston was trafficked for the next 10 years of her life.

“He beat us constantly,” Charleston said of her trafficker. “When someone beats you brutally, you believe them when they say they’re going to kill you — so I kept my mouth shut.”

Charleston was arrested multiple times, but in 2006 was convicted of tax evasion. She said law enforcement hoped she would reveal the details of the trafficking ring she was trapped in, but she was too afraid to do so.

“I wound up serving 13 months in federal prison because I was too scared to tell on him,” Charleston said. “I did not have hope for a future that did not revolve around my body being sold. I never thought I’d get out. I didn’t think I’d live to see 21.”

After she was released, her trafficker eventually went to prison. It was then that Charleston took advantage of her opportunity to get out.

In 2020, then-President Donald Trump pardoned Charleston for her crimes. Now, she’s dedicated her life to advocating for trafficking survivors. Specifically, she educates and creates businesses to provide legal and career resources to young women who get lured into the trafficking world as she once did.

Chapter 3: Who Is Most At Risk?

Charleston and Perez both pointed out that traffickers are in a constant cycle of seeking out victims, and that they hone in on those who appear to be vulnerable.

In Charleston’s case, she said that, despite having a strong and loving family, she was assaulted twice as a child — once at a sleepover in elementary school, and another time after sneaking away from a church lock-in.

“If you had talked to me back then, I would have said, ‘This is my choice,”” Charleston said. “I blamed myself for everything that was happening to me.”

Charleston said a friend later asked her what would have happened had she “chosen” not to work. She said she just laughed.

“There’s a slim a minority of people who actually have choices and choose to do sex work,” Charleston said.

Traffickers are looking for people who are isolated, who come from underserved communities, who are craving what appears to be a luxurious lifestyle and who were raised in what Perez called “poor social structure” at home.

According to data provided by HSI Dallas, its task force made 221 arrests and identified 42 victims during trafficking investigations in 2021. Those numbers have consistently grown each year since the agency started keeping track in 2019.

Victims are getting younger these days too, Perez said. And social media is making it easier.

Perez said a majority of trafficking — in North Texas and elsewhere — is done online.

“The advertisements are very grotesque, very blatant in what they’re doing,” Perez said. “It’ll have an age, a gender, a race and then a list of services they’re willing to offer. Pretty much anything one can imagine.”

The customers identified in HSI Dallas sex trafficking investigations come from all across the board.

“We had everything from a college student just looking to get lucky to customers with low self-esteem who don’t think they can find a girlfriend on their own,” Perez said. “A guy came in who was a GM plant worker with four kids and a wife at home. We had to listen to him call his wife, again, and say he was arrested for buying sex.”

Also among the customers Perez said he came across was a University of Texas at Arlington professor, and multiple attorneys who’d worked as defense attorneys for traffickers.

“We try to go after consumers as well as the sellers of commercial sex,” Perez said.

Chapter 5: A Shift In Focus

Now, officials are also changing the way they approach their investigations.

As was the case in Charleston’s arrest, victims of trafficking are often labeled as prostitutes — a designation that comes with stigma that makes it difficult for victims to come forward, and also blocks the lens needed to get justice for them.

“You might see them walking down the street in Dallas advertising themselves for commercial sex,” Perez said. “What you don’t see is the trafficker sitting a block away. You don’t see that the trafficker has brutally beaten this victim multiple times in their life.”

Instead of penalizing these victims, Perez said his team has now intentionally created a victim-focused approach that works to help survivors heal from their trauma and move on from the horrors they’ve endured.

“As we change that opinion and also as we change the law enforcement approach, we’re going to be a lot more successful,” Perez said.

For Perez, that success looks like survivors escaping the physical and mental bondages of trafficking, and being free to rebuild their lives as Charleston has.