Court documents state that Redd used deceptive and coercive tactics as well as a physical force to compel victims to engage in sex acts in exchange for money. Redd kept all of the proceeds and trafficked the victims in Iowa City, Cedar Rapids, Waterloo, Clive, and surrounding areas. Redd also gave the victims a controlled substance and posted advertisements for paid sex acts with the victims on an escort website.

Witnesses testified at the trial that Redd targeted vulnerable and broken women whom he could traffic and that he had boasted about doing it for years. Redd reportedly recruited multiple women for the purpose of sex trafficking, supplied them with drugs, made video recordings of the women engaged in sex acts to use as blackmail, lied to them about his intentions, and told the women they owed him money.

Redd also reportedly raped two women and physically restrained the women he abducted against their will.

The Judge noted that Redd failed to express any remorse for his actions and lied while testifying at the trial.

Redd was sentenced to 45 years in prison for sex trafficking an adult by force, fraud, and coercion. He was also sentenced to 5 years for facilitation of prostitution, and 40 years for distribution of a controlled substance to a person under the age of 21. The sentences are to run concurrently. 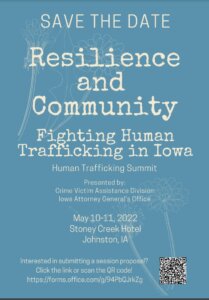 Agenda information is available when you click the link below to register. CEUs will be available for various professions and will be listed once they are finalized.  It will be held Tuesday and Wednesday, May 10 and 11 at the Stoney Creek Hotel in Johnston, Iowa.

On day two of the Summit, the NAHT will be hosting a breakout session starting at 12:45pm with the following speakers and topics:

12:45 – Overview of Panel (presented by Dr. George Belitsos, Chair of the NAHT Board)

12:50 – Iowa Businesses Against Trafficking (presented by Sydney Fox, Safe at Home Coordinator, and Christy Johnson, Safe at Home Program Administrator, from the Secretary of State’s Office)

1:45 – Local and Regional Iowa Coalitions Fighting Human Trafficking (presented by Bernadette Rixner, member of the NAHT Board of Directors and Board Chair of the Siouxland Coalition Against Human Trafficking)

The Iowa legislature has now passed its 100th day and legislators no longer receive their per diem. The 2022 legislative year will end soon and the Senate has yet to place HF 2464 on the floor.

Today we ask you to send your Senator (find your senator) and Senator Whitver ([email protected]) an email explaining the huge loss to young survivors if the Safe Harbor and Expungement bill does not move forward pass. Our organization has worked in good faith to offer amendments to address concerns expressed by the commissioner of the Iowa Department of Public Safety.

The original bill passed out of the Iowa House on a vote of 95 in favor and one opposed. The NAHT has been working on this bill for four years. Please help us to make 2022 the year the Legislature and Governor finally help survivors of human trafficking to heal and integrate back into society. Safe Harbor bills have passed in 31 states. Let’s move Iowa closer than we have been before! Help us to make Iowa the 32nd.

The Secretary of State’s (SOS) Chief of Staff is doing a good job of keeping the Iowa NAHT updated on some of the marketing efforts that they and IBAT partners such as the NAHT are doing. Below is a press release from the Small Business Development Centers.

America’s SBDC Iowa announced today it has joined a statewide coalition to end human trafficking in Iowa. The Iowa Businesses Against Trafficking (IBAT) initiative is spearheaded by the Iowa Secretary of State’s Office. The goal is to have Iowa’s business community raise awareness and help prevent human trafficking.

Membership in IBAT is open to any business or nonprofit organization that operates in the state of Iowa and shares a commitment to taking steps to promote awareness of human trafficking.

Below is a photo sent to the NAHT. The photo was taken on Interstate-235 of a truck from Doll Distributing. They were one of the first companies to join IBAT. 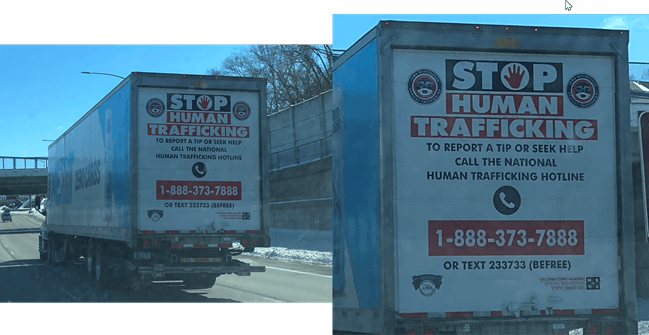 The SOS has had recent meetings with the Iowa Restaurant Association, and they are going to:

Ukrainian Refugees at Risk of Being Trafficked

Four and a half million desperate refugees have poured over the Ukrainian border to escape the ravages of war. These people are primarily children, mothers, and grandparents. Human traffickers see this refugee crisis as a business opportunity.

Before February 24th when Russia invaded Ukraine, their lives looked very much like our own:  work, school, and family. Today, shock and exhaustion are etched onto their faces. Their world has been turned upside down. A common desire unites the hearts of these desperate Ukrainians, safety. Safety from the bomb blasts and killing of civilians. 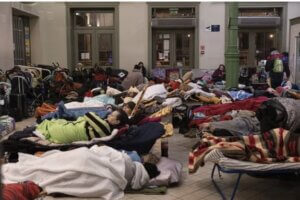 Women and children from Ukraine sleep in a makeshift shelter in the train station in Przemysl, Poland.

It is important to note that not all fleeing people are guaranteed safety upon reaching another country.

On the borders of host nations- amongst the officials, non-profit organizations, and genuinely concerned citizens trying to help- criminals are poised to prey upon the vulnerability of displaced people. Human traffickers recognize an opportunity to lure refugees with false promises of safety and security. To read more click here (PDF).

Two years ago, the NAHT recognized Grassley with an Outstanding Anti-Trafficking Service Award. He again is demonstrating his anti-trafficking leadership by co-sponsoring this federal legislation.

“Human trafficking is often an issue that is right under our noses. The victims of these horrific crimes deserve support as they find their way back to living a normal life. This bill aides victims on their pursuit of justice, and opens more doors to educate law enforcement and high-risk youth on how to detect trafficking. In conjunction with other bills I’ve supported and sponsored, I intend to continue fighting against the horrendous work of traffickers and find justice for victims,” Grassley said. To read more about this legislation click here (PDF).