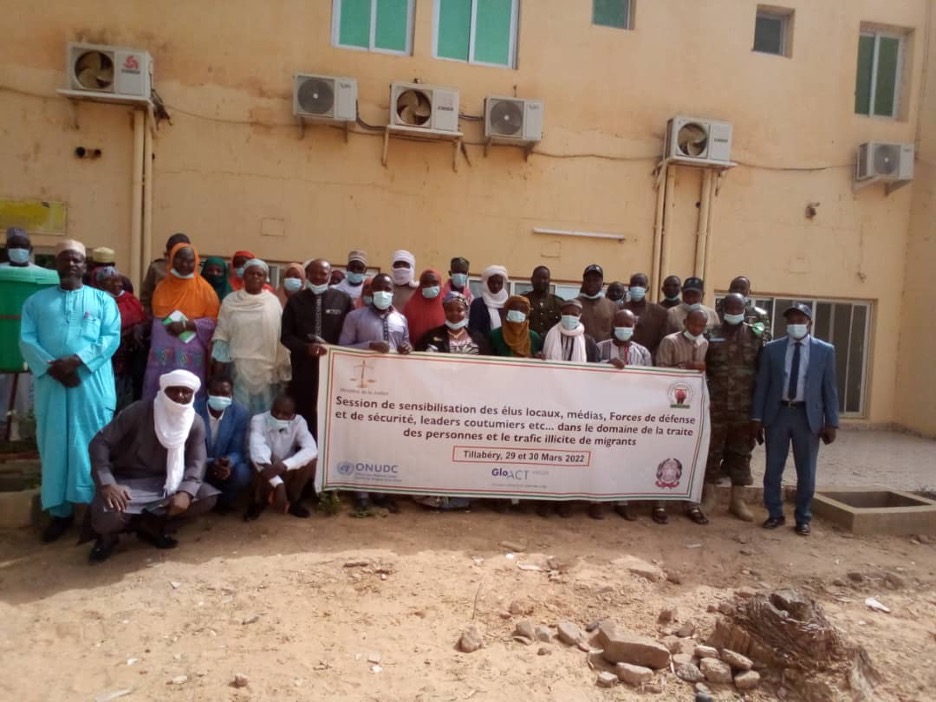 Tillabéry, Niger 04 April 2022 –Trafficking in Persons (TIP) and Smuggling of Migrants (SOM) are complex realities in Niger. As a country that acts as a departure, transit and destination point for victims of trafficking and smuggled migrants, Nigerien authorities have made the fight against this phenomenon a government priority.

According to Maman Sadissou Laouali, UNODC National Project Officer, Niger., this translates into ratifying all legal instruments relating to the fight against human trafficking and migrant smuggling. However, he explains that “many officials, especially those who work and live at border posts where migrants from West Africa enter Niger, are not yet knowledgeable enough about the issues of human trafficking and migrant smuggling.”

To address these challenges, UNODC, in collaboration with the agency for the Fight against Trafficking in Persons and Smuggling of Migrants (ANLTP/TIM), organizes awareness-raising events at border crossings throughout the country.

The event was held from 20 to 30 March 2022 in Tillabéry, a region on Niger’s border with Mali and Burkina Faso. It brought together over 50 participants from local youth and women’s associations, border control authorities, members of the media and commercial transportation companies, and traditional and religious leaders.

Addressing the participants, Hamadou Issa Hamidou, Deputy Prosecutor of the Hight Court of Tillabéry, explained that Tillabéry is a transit region for SOM and TIP because it’s a key entry point for migrants coming from West Africa. The event provided an opportunity to discuss the respective roles and responsibilities of the participants in addressing both crimes. It included an exchange on ensuring that victims and smuggled migrants receive adequate protection and assistance.

Ousmane Mamane, ANLTP/TIM General Director, pointed out, “We see cases of human trafficking throughout the country, with some forms of exploitation being specific to certain regions, and Tillabéry is an entry point for migrants coming from West Africa who transit the country. Mr Ousmane, who describes UNODC as a key partner in countering TIP and SOM, added, “The objective of this event is to better understand human trafficking and migrant smuggling and their different forms – especially the ones that are most common in the Tillabéry region.”

Summarizing the event, Maman Sadissou Laouali said, “The participants actively contributed to the discussions, asked pertinent questions, and showed interest in deepening their knowledge of trafficking in persons and migrant smuggling. Many confirmed that it was the first time they heard about these crimes, with the opportunity to discuss them.”

This awareness-raising event was the second activity of its kind in this region.

The Tillabéry event was organized under the framework of UNODC’s Global Action against Trafficking in Persons and the Smuggling of Migrants (GLO.ACT). It was part of a two-year joint initiative funded by the Italian Ministry of Foreign Affairs and International Cooperation (MFA) to support Niger to tackle human trafficking and migrant smuggling. An earlier phase of the project (2015-2019) was funded by the European Union.

The Global Action against Trafficking in Persons and the Smuggling of Migrants – Niger (GLO.ACT-Niger) is a two-year (2019 – 2021), € 500.000 joint initiative by the Italian Ministry of Foreign Affairs and International Cooperation (MFA) and the United Nations Office on Drugs and Crime (UNODC). An earlier phase of this project (2015-2019) was supported by the European Union.

The project builds on a global community of practice set in motion in GLO.ACT 2015-2019 and assists the Government of Niger in targeted, innovative and demand-driven interventions: sustaining effective strategy and policy development, strengthening the criminal justice response, and regional and trans-regional cooperation.

This project is funded by the Government of Italy.