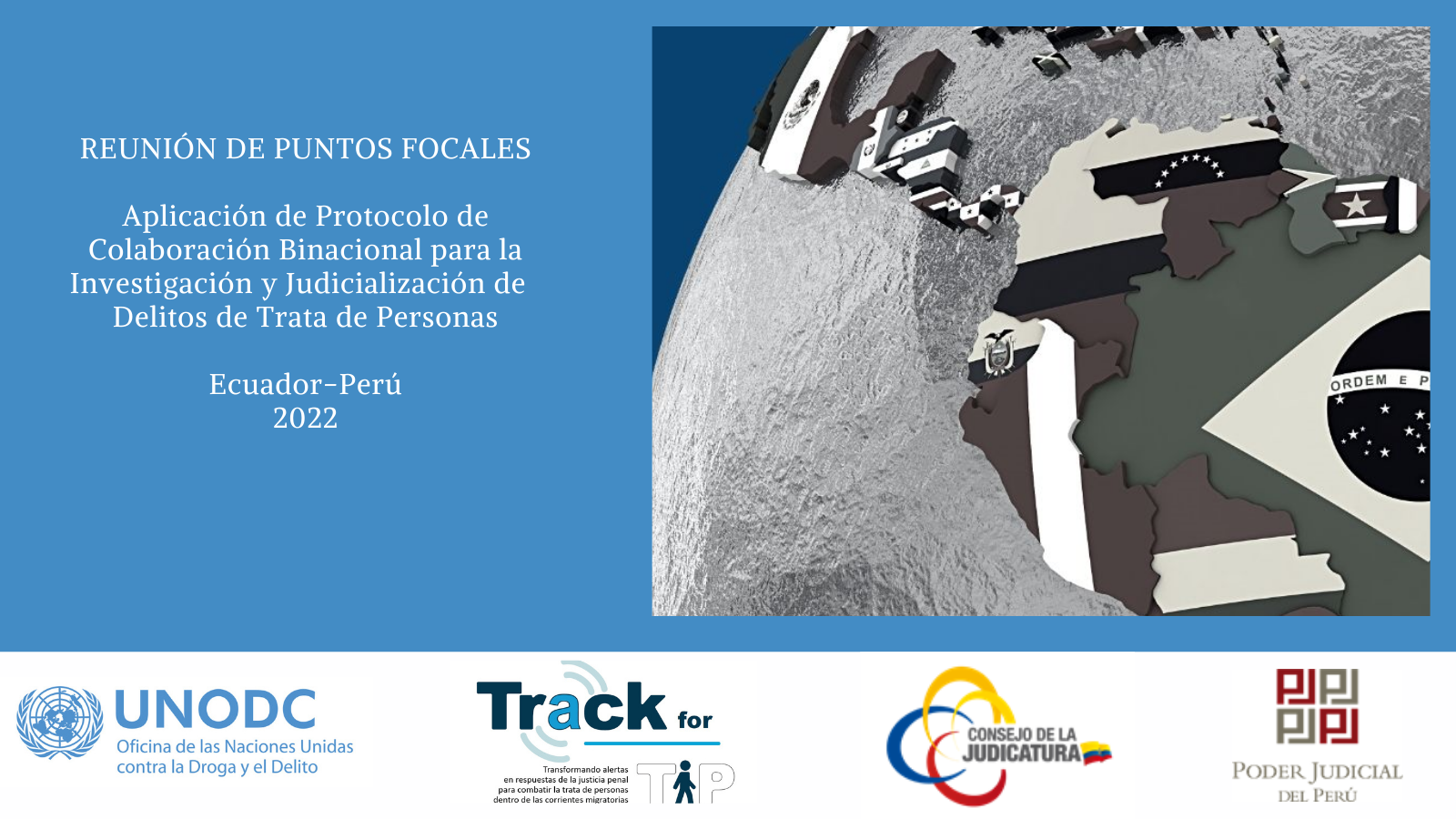 The three-day virtual meeting, promoted by the United Nations Office on Drugs and Crime (UNODC) – through the Track4Tip Initiative – the Judiciary of Peru and the Judiciary Council of Ecuador, met the objective of strengthening the response of the criminal justice system of both countries

Lima, Quito, March 31, 2022 – The working day of focal points for the implementation of the collaboration protocol between the judicial system of Ecuador and Peru for the investigation and prosecution of the crime of human trafficking concluded with six agreements that enhance the articulation of 21 institutions of the two countries.

The three-day virtual meeting, promoted by the United Nations Office on Drugs and Crime (UNODC) – through the Track4Tip Initiative – the Judiciary of Peru and the Judiciary Council of Ecuador, met the objective of strengthening the response of the criminal justice system of both countries regarding the investigation and prosecution of this crime, which especially affects women and girls.

This was achieved with the support of Peru’s Public Prosecutor’s Office, Ministry of the Interior, and Ministry of Women and Vulnerable Populations; and Ecuador’s Ministry of Government, Secretariat of Human Rights, and National Human Rights Institution.

The first agreement focused on the inter-institutional commitment to implement the referred Protocol, identifying its challenges, and generating proposals for its improvement; the second agreement addressed the formulation of a binational Peru-Ecuador institutional directory, for which they “commit to reach information from their institutions and update it permanently.”

After an intense debate, the third agreement ratified the technical approval of the documents: Mechanism of protection and attention to children and adolescent victims in Ecuador and Peru and Mechanism of protection and attention to adult victims in both countries.  These tools will begin a process of practical validation of the mechanisms until the second technical meeting of focal points this year.

It should be noted that the tools have also been adapted to the context of mixed migratory flows; in this sense, a high incidence of cases of victims of Venezuelan nationality has been identified in the border area.

In the same context, the documents on ” Human Trafficking Indicators” and “Case referencing file” will also begin a process of practical validation until the second technical meeting of focal points this year, scheduled for June.

Similarly, in the fifth agreement, the institutions and their various participants completed the “form for the collection of binational information Peru-Ecuador”, an instrument that was applied to key informants with expertise in human trafficking in the border area.

Finally, the focal points agreed to form a Binational Immediate Response Team – ERI, to guarantee access to justice and provide a timely and comprehensive response based on the needs of each victim. The Judiciary of Peru and the Judiciary Council of Ecuador, with the support of UNODC, will propose its members and functions, which will be validated at the second technical meeting of focal points this year.

At the end of the day in which challenges, critical issues, and good practices of international cooperation were evaluated, Jorge Salinas, coordinator of focal points in Ecuador and President of the Provincial Court of Justice of the Ecuadorian province of El Oro, thanked the contribution of UNODC, the Judiciary of Peru and the Judiciary Council of Ecuador and the other participating institutions to achieve a coordinated and effective response to the crime of trafficking in persons.

For his part, the coordinator of focal points of Peru and President of the Superior Court of Tumbes (Peru), José Luis Troya, said: “We will overcome the critical issues identified as we continue this work in a determined and permanent way to provide an appropriate protection to the victims. We have efficient and friendly guidelines and mechanisms to achieve a better fight against this crime”.

TRACK4TIP is a three-year initiative (2019-2022), implemented by the United Nations Office on Drugs and Crime (UNODC), with support from the U.S. Department of State’s Office to Monitor and Combat Trafficking in Persons / JTIP.

The project benefits eight countries in South America and the Caribbean with national and regional actions in Ecuador, Peru, Brazil, Colombia, Dominican Republic, Trinidad and Tobago, Curaçao and Aruba.

The overall objective of the project is to enhance the regional criminal justice response to trafficking in persons in the migratory flows of the beneficiary countries through a multidisciplinary and victim-centered approach, with actions at the regional and national levels to identify, prevent and prosecute cases.