As all anti-trafficking activists are well aware, HF2259 went into effect on January 1st, 2022. This legislation was originally campaigned by the NAHT and now requires hotels/motels that desire government business to undergo human trafficking training. This requirement is broader than many hotels/motels realize. The law applies not only to the state employees who book rooms or events, but also cities, counties, school districts, and publicly-funded colleges and universities.

In only its first month, 13,000 Iowa hotel and motel employees have successfully completed awareness training! These Department of Public Safety certified hotels now know not only how to recognize human trafficking, but when and how to report it.

A Hotel/Motel training page is now live on the Networks website. You can see it directly at https://iowanaht.org/hotel-training/. There you can access the Hotel/Motel Employee Training Video and numerous educational materials.

If you are a hospitality Industry business leader and would like the NAHT to offer face-to-face and/or hybrid training of your staff at your facility, please contact local Anti-Trafficking Coalition leaders in your area or any of our current NAHT Board members. You may also email Dr. Joe at [email protected] for more information or with questions. 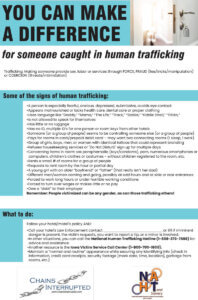 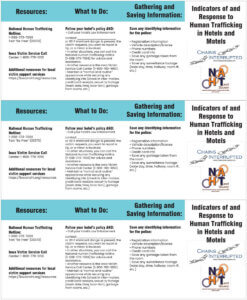 If you are an employee, a business leader, and/or know a business leader, please consider increasing your impact in combatting human trafficking in Iowa by becoming a Registered Member of the Iowa Secretary of State’s Iowa Businesses Against Human Trafficking (IBAT) program. Sponsored by the Safe at Home Program, the IBAT initiative provides recognition and resources for Iowa business members who are willing to make an annual commitment to “Learn Something” and “Do Something” in order to fight human trafficking in Iowa.

Since the program went live on January 13th, 300 Iowa Businesses have already registered! For a list of the first 35 IBAT registered businesses, please click here (PDF).

For the past 6 months, the NAHT has collaborated with the Iowa Secretary of State Office to create this new statewide awareness program. This statewide anti-trafficking program was launched by Paul Pate, Iowa Secretary of State, immediately following the January 13th Proclamation signing and awards. Hotels and motels certified by the Iowa Department of Public Safety have a head start in becoming IBAT businesses. Please connect to the new IBAT website here in order to join the IBAT program:  https://ibat.iowa.gov/. For non-profit businesses, remember that you can join IBAT just like any for-profit business.

Following the proclamation signing, five Outstanding Anti-Trafficking Service Awards were presented to five Iowans. This award honors individuals and organizations that have made remarkable contributions to ending trafficking in Iowa. Next month’s blog/newsletter will name and pay tribute to these 5 Iowa heroes. The final speaker was Secretary of State, Paul Pate, who officially announced the Iowa Businesses Against Trafficking (IBAT) Initiative. 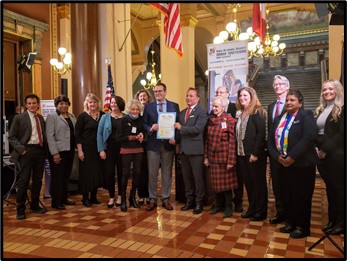 To view a video of the Proclamation signing, 5 Award Presentation, and the Secretary of State’s IBAT announcement, please click the following link: https://vimeo.com/666583063

Both prior to and after the event, Maggie Tinsman, chair of the NAHT Legislative Advocacy Committee hand-delivered to all 150 Iowa Legislators the 2022 NAHT legislative priorities (PDF). She and the committee also visited with the leadership of both the Iowa House and Senate. These meetings were organized with the help of Advocacy Strategies. 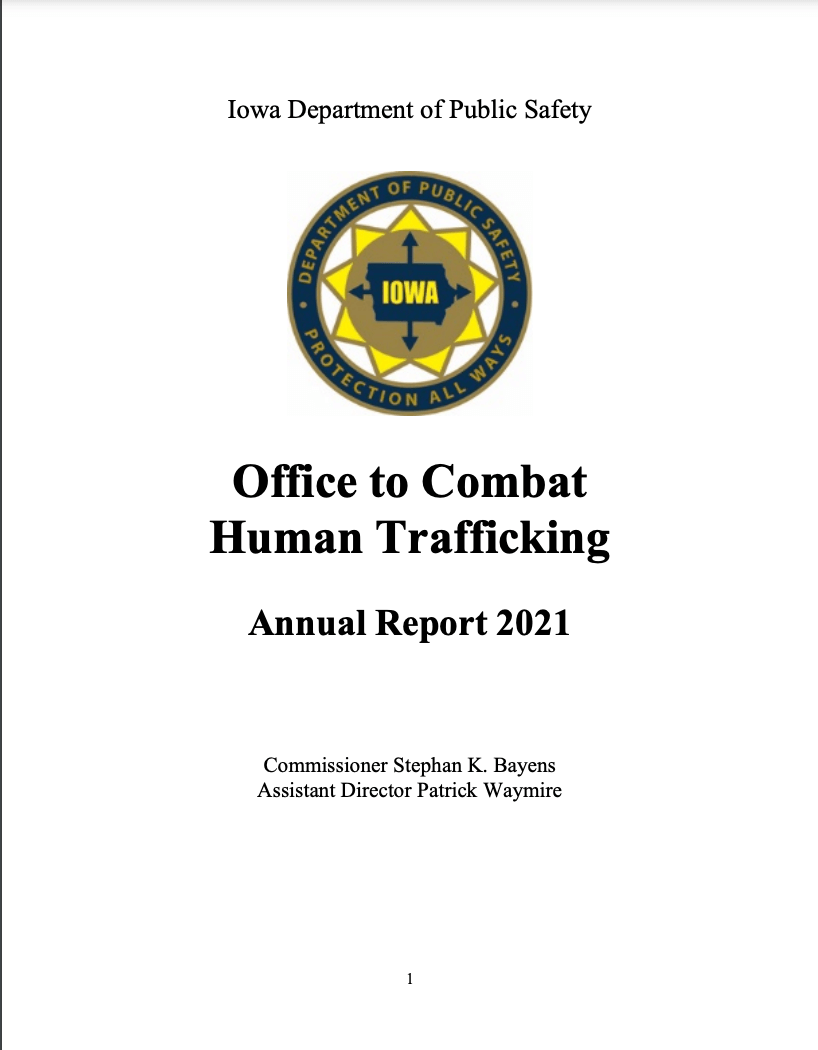 The Office to Combat Human Trafficking recently released its 2021 Annual Report. This Department of Public Safety 19 page report can be accessed at the following link: https://dps.iowa.gov/divisions/intelligence/human-trafficking

Patrick Waymire heads the office and reviewed the report at the January 27th meeting of the Central Iowa Service Network Against Trafficking and the February 1st meeting of the NAHT Board of Directors.

Release of the National Action Plan to Combat Human Trafficking

On December 3, 2021, President Biden signed the updated National Action Plan to Combat Human Trafficking. The National Action Plan outlines a three-year comprehensive approach to combat human trafficking, including actions to strengthen prosecution of traffickers, enhance victim protection, and prevent the crime from occurring within our borders and abroad.

Secretary Blinken chairs the President’s Interagency Task Force to Monitor and Combat Trafficking in Persons (PITF), a cabinet-level entity created by statute in 2000 to coordinate U.S. government-wide efforts to combat trafficking in persons. The PITF, which consists of 20 federal agencies, serves as a forum for collaborating on the implementation of the National Action Plan’s priority actions. PITF agencies are already taking concrete steps to implement key aspects of the updated National Action Plan, including by forming working groups.

The National Action Plan highlights several critical ways the Department of State combats human trafficking. It calls for collaboration between the Department’s Diplomatic Security Service and other federal and local law enforcement agencies to continue building its collective capacity to pursue human trafficking cases and promptly connect victims to services.

The full text of the National Action Plan to Combat Human Trafficking can be found by clicking here (PDF).

(This article is based on a recent study done by Heyrick Research.)

Decreasing the demand for commercial sex is often considered the most difficult effort to combat sex trafficking. While an increasing number of jurisdictions have laudably shifted their focus away from arresting potential victims and toward arresting buyers and traffickers, the resource-intensive nature of stings means that even large cities can often only arrest a few hundred buyers a year—a fraction of the total buyer population. Former Seattle prosecutor Val Richey has noted that a single new online commercial sex ad can get a few hundred responses in an hour.

Therefore, while arrest may be an effective deterrent for some buyers, arrests alone are not a sufficiently scalable approach to curb demand. In general, there has been an absence of rigor in evaluating the effectiveness of the various deterrence tactics that have been deployed. No one really knows to what extent demand can be decreased, or which methods are most effective because of the lack of quantified insights. Proven preventative measures are badly needed.

Below is a review of deterrence tactics, and what is known—or not—about their impacts. Given the numerous gaps, Heyrick Research has highlighted key questions for data collection needed to develop measurable, evidence-based demand reduction models. To continue reading, click here (PDF).

The post 13,000 Hotel Employees Received Training in the Month of January! appeared first on Network Against Human Trafficking and Slavery.