Skip to content
It’s my privilege to write to you at the start of 2022 and to announce major events to launch Iowa’s observance of “Slavery and Human Trafficking Prevention Month”. We invite you to join the Network Against Human Trafficking and Slavery (NAHT) for these events and thereby join the movement to end human trafficking in Iowa. Click a link below to jump to a particular article or scroll down to read the whole blog post.

New Year 2022 greetings to our Iowa NAHT blog subscribers. Worldwide there are at least 40.5 million people trafficked and enslaved. Globally, one in four of these exploited and abused souls are under the age of 18.

So how can you as an individual help in the fight against human trafficking and slavery? As a first step, you can educate yourself about modern-day slavery and help others to become aware of this growing crime. You can insist that businesses check their supply chains for slavery-produced goods. January 2022 is an especially good time to learn the facts about trafficking. In recognition of Slavery and Human Trafficking Prevention Month, there are numerous Iowa events and training opportunities. These events are free and can be found in this blog post.

You can also donate funds to anti-trafficking organizations such as the Iowa NAHT. If you go to https://iowanaht.org/donate-now/ your gift to the Network can be completed quickly using your credit card or PayPal.

You can also urge your state representatives to propose and/or strengthen anti-trafficking laws. Tap here for the anti-trafficking legislative priorities for 2022 (PDF). Speaking to your local legislators gives you a great opportunity to join forces with the NAHT board and other allies from across Iowa to improve public policy. A good day to visit with your Iowa Representative and Senator would be Thursday, January 13th which is NAHT Day at the legislature. 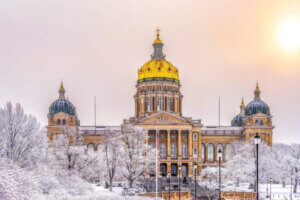 That day, the NAHT will host the public signing of a proclamation by Governor Kim Reynolds designating January 2022 as Slavery and Human Trafficking Prevention Month. The proclamation signing will take place on Thursday, January 13th at 11:00 a.m. in the Rotunda of the State Capitol Building in Des Moines. Due to the risk of Covid-19 infection, all anti-trafficking advocates attending this annual event must wear masks.

Outstanding Anti-Trafficking Service Awards will also be presented by the NAHT and Governor on January 13 immediately following the proclamation signing. These five exceptional Iowa anti-trafficking heroes and organizations include: 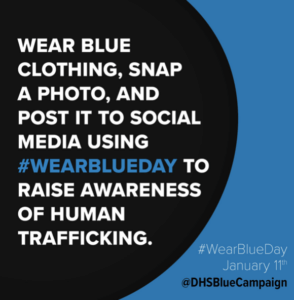 On Tuesday, January 11th we ask that you wear blue to show your support for human trafficking awareness. The color blue is the international color of human trafficking awareness. The Department of Homeland Security created this initiative to draw attention to this horrific crime. The NAHT is asking all anti-trafficking advocates to wear blue clothing in order to increase awareness. We also ask you to encourage your friends, classmates, and family to participate and share pictures of you wearing blue on social media with the #WearBlueDay hashtag. You can find more information about this here: https://www.dhs.gov/blue-campaign/wearblueday

A Hotel/Motel training page is now live on the Networks website. You can see it directly at https://iowanaht.org/hotel-training/ and/or get to it in the dropdown under the Resources menu link in the top navigation. There you can access the Hotel/Motel Employee Training Video and numerous educational materials.

If you are a Hospitality Industry business leader and would like the NAHT to offer face-to-face and/or hybrid training of your staff at your facility, please contact local Anti-Trafficking Coalition leaders in your area or any of our current NAHT Board members. You may also email Dr. Joe at [email protected] for more information or with questions.

President Joe Biden, in acknowledgment of January as National Human Trafficking Prevention Month, said his administration will do all in its power to combat “a profoundly immoral crime that strikes at the safety, health, and dignity of millions of people worldwide.”

“We reaffirm our commitment to protect and empower survivors of all forms of human trafficking, to prosecute traffickers, and to bring an end to human trafficking in the United States and around the world,” Biden said in a statement.

“During National Human Trafficking Prevention Month, let us resolve to counter injustice and fortify our commitment to pursue dignity and freedom for all people,” the president said. “I call upon businesses, civil society organizations, communities of faith, families, and all Americans to recognize the vital role we play in combating human trafficking and to observe this month with appropriate programs and activities aimed at preventing all forms of human trafficking.” To read more about the President’s statement, tap here.

(Thanks to the DSM Register for this information.)

They were physically and verbally abused, forced to have sex with strangers, and strung out with drugs or threats to their families. Three have died since.

For more than a dozen women, meeting Marlin Thomas was the beginning of a hellish ordeal. At his sentencing hearing on November 15th, 2021 in federal court in Des Moines, Judge John Jarvey heard from several of the women and their family members about the abuse he put them through and how it affected their lives.

“You intentionally groomed and took the innocence of so many,” one woman, identified in court as B.T., wrote in a statement read by an investigator. “We will never get that back.”

Thomas, 46, of Des Moines, was sentenced on November 15th, 2021, to life in prison after admitting to trafficking and drug charges involving six women and a 14-year-old girl. Des Moines Police Sgt. Brady Carney, the lead investigator in the case, testified he had identified at least 10 more women who had declined to take part in the investigation, which covered nearly a decade of criminal activity from 2009 to 2018. The true number, Carney said, could be even higher. To continue reading this article, tap here (PDF).

Iowa Training on January 20th at 6:30 pm on Trauma-Informed Care

Free Anti-Trafficking training is being offered on Trauma-Informed Care on Thursday, January 20th by Central Iowa Network Against Trafficking and the Plymouth Human Trafficking Task Force, and Terry Forliti is the trainer. Terry Forliti is the Executive Director of “Breaking Free”, a treatment program in St. Paul that treats between 150 to 200 trafficking survivors each year using the trauma-informed approach.

This training will be held on January 20th and Plymouth Church, at 4026 Ingersoll Ave, Des Moines, IA 50312. Doors open at 6 pm, and the program will begin at 6:30 pm. This will be a hybrid event and the link to the program will be provided to those who are registered.

You can register here: https://www.eventbrite.com/e/trauma-and-its-role-in-human-trafficking-tickets-230042381957. It will be made public the day of the event. Those who chose to attend in person will be required to wear a mask and social distancing will be enforced. Contact Shirlee Reding ([email protected]) with questions or for additional information.

A new, tiny piece of technology could be tracking you. Human trafficking survivors are sounding the alarm over an Apple product called AirTag. It is a tracking device meant to help you find where you put a personal item, but now, criminals are using them to take advantage of victims. To continue reading, tap here (PDF).

The post Iowa Man Sentenced to Life for Sex Trafficking appeared first on Network Against Human Trafficking and Slavery.