I was a young, recent law graduate when I first experienced the horrors of human trafficking. It was in 1998. I was working for a human rights NGO and attending a workshop in South Africa. A taxi driver told me about two girls from my home country who worked in a bar in Johannesburg. He was very concerned about them.

They were sisters, and just 14 and 16. I met them and discovered they’d been trafficked from Malawi to South Africa and forced to work as prostitutes. They were in a terrible state, both physically and mentally.

I managed to arrange their return to Malawi. Today, one of the sisters is working as an accountant, the other as a head teacher at a primary school. We stayed in touch, and they still see me as their ‘father’.

This encounter encouraged me to dedicate my career to combatting human trafficking and, after Malawi ratified the UN Trafficking in Persons Protocol in 2005, I became a member of a commission that developed the first national human trafficking law. It came into force in 2015.

Maxwell Matewere, addresses a local community in Malawi about the threat of human trafficking.

Human trafficking is a big problem in my country but, at that time, there was very little awareness about this crime. Every year, hundreds of men, women, and children, mainly from rural areas, are trafficked within, through and outside of the country for forced labour and commercial sexual exploitation.

But now my country has the legal means to convict traffickers appropriately and provide protection and support to victims. This is a major step forward. It’s my job to support the implementation of the anti-human trafficking law and the national action plan, which was developed and is updated with UNODC assistance.

I travel around the country to train, mentor and coach law enforcement officials who handle cases of human trafficking. I explain how they can use the laws to detect cases, identify and protect victims and secure prosecutions of the criminals.

The officials who deal with cases of human trafficking – police officers, border monitors, immigration officers, and investigators – are encouraged to put the human rights and needs of the victim first, and I work with social workers who help victims on their road to recovery, including those brave survivors who serve as witnesses in court cases.

A former victim of human trafficking in Mauritania.

I visit rural communities, where I speak to the traditional village leaders about human trafficking and the tricks used by the traffickers: these people have a lot of power in their communities to influence behaviour change. I also visit schools, health centres and churches, to raise awareness of the crime among the general public. It’s very rewarding to work for the United Nations, to get the encouraging feedback from the participants of my training sessions and roadshows.

Shining a light on a hidden crime

I see how effective my work is, through the ever-increasing numbers of victims rescued from human traffickers, the number of arrests made and the cases that are successfully prosecuted.

There are several cases I’ve been involved in, which I’m proud of.  These include the rescue of Malawian victims of labour exploitation from Kuwait and Iraq and their safe return home, and the rescue of men from Nepal who had been trafficked to Malawi.  And there are the recent rescues of young victims of forced marriages and prostitution following my mentoring this summer.

Some of the cases I worked on are cited by lawyers and prosecutors. They’re also used by the Malawian police services in their training curriculum for new recruits.

In my country and internationally, I’m referred to as a ‘hero’. Earlier this year, I was honoured by the U.S. Department of State. But, for me, the best reward is to see how my work has brought much-needed national, regional and global attention to human trafficking, which is often a hidden crime.

Maxwell Matewere (left), a crime prevention expert with the UN Office for Drugs and Crime (UNODC), is accompanied by two officials as he investigates human trafficking allegations in Malawi.

Policymakers now recognise human trafficking as an issue of growing concern that needs to be addressed, and the media in Malawi are now playing a key role in highlighting human trafficking. I see it as my duty to make sure there is not just one Maxwell, but many Maxwells. I want to train more people so that my country can effectively respond to this cruel crime.

Through my work, I can make a difference and stand up for vulnerable people and prevent human trafficking. This is what motivates me and the desire to help the victims, their suffering really concerns me.

Sometimes my work does affect me emotionally. I see some terrible things, I question how people can commit such acts, especially to innocent children. But I’m able to balance between my private and work life.

I have three children, a boy of 13 and two girls age seven and four. When I’m home, I spend time with them. At the weekends, we all go to church. My wife and the kids really miss me when I have to travel. The two eldest children are aware of the work I do, but I don’t discuss specific cases with them.

My seven-year-old daughter was recently asked at school to bring in a picture of a famous person, and she took a picture of me and told the class her father is a hero because of the work he does. 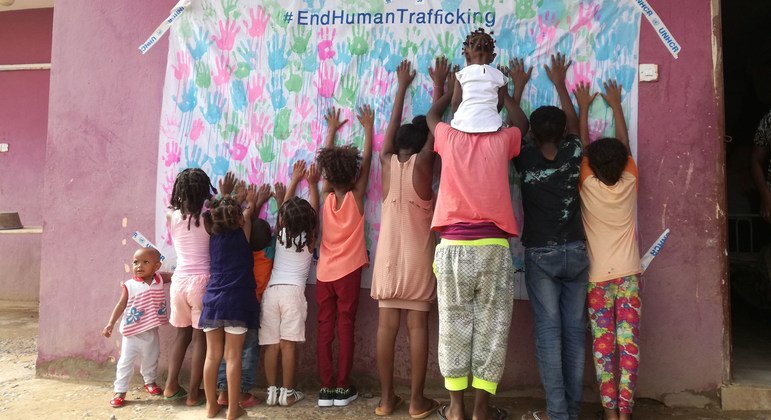