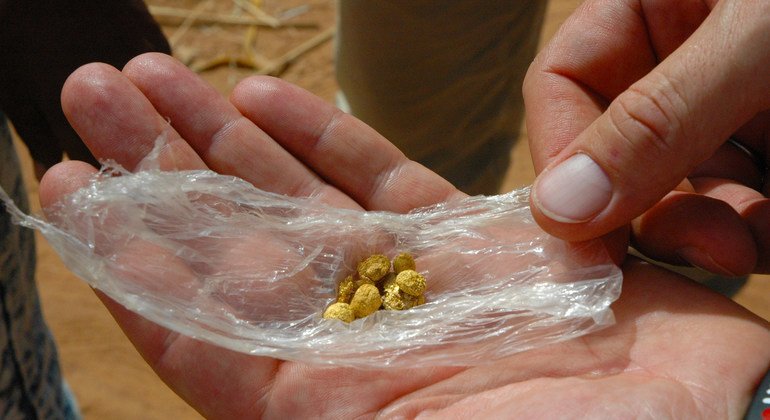 UN rights chief Michelle Bachelet said that Venezuelan authorities had failed to investigate crimes linked to the industry, in the region of Arco Minero del Orinoco, including extortion, amputation and miners being buried alive.

Criminal groups exercise control over a large number of mining operations there, where children as young as nine have been seen working, according to the report from Ms. Bachelet’s office, OHCHR.

This is despite the “considerable” presence of the Venezuelan military, whose commanders were allegedly paid off via a “system of corruption and bribery” – all made possible by exploiting unskilled and sometimes barefoot workers, forced to do 12-hour shifts, descending deep pits without any protection.

According to a press release from OHCHR on the report, the miners “are required to pay about 10-20 per cent of what they earn to the criminal groups who control the mines, and an additional 15-30 per cent to the owner of the mill where rocks are crushed to extract gold and other minerals”, the release states.

“They must also investigate, prosecute and punish those responsible for human rights violations, abuses and crimes.”

Testimonies in the UN report – initially requested by the Geneva forum amid allegations of serious rights violations during anti-Government protests in the country beginning in 2014 – reported harsh punishments for miners not complying with the rules imposed by the criminal groups.

In addition to severe beatings, other sanctions have included being shot in the hands, as well as killings.

“Witness accounts describe how bodies of miners are often thrown into old mining pits”, the OHCHR report continued, noting that violence was also linked to disputes between criminal groups – or “sindicatos” – over control of the mines, which had likely left 149 people dead in 16 such episodes in the last four years.

“They determine who enters and leaves the area, impose rules, inflict harsh punishment on those who break them, and gain economic benefit from all activity within the mining area, including through extortion in exchange for protection”, the report states, also alleging the involvement of the security forces in some of these incidents.

Highlighting the economic crisis and lack of work in Venezuela which the oil-rich country attributes to sanctions, the OHCHR report noted how internal migration to the mining area has increased “dramatically” in recent years, with workers engaging in arduous and informal labour.

Research and interviews by UN investigators also indicated that women are also performing both mining and other related jobs, with several accounts received highlighting  a sharp increase in prostitution since 2016, sexual exploitation and trafficking in mining areas, including of “adolescent girls”.

Living conditions in mining areas are described as “appalling” in the press release from OHCHR, with no running water, electricity or sanitation.

“Pools of stagnant and polluted water resulting from mining, are breeding grounds for mosquitoes, leading to a rise of malaria cases in the region, affecting not only migrant workers but also indigenous communities.”

Both workers and native communities – whose territories and natural resources have been destroyed – have also been badly affected by mercury poisoning, women disproportionately, testimonies indicated.

The metal is used to separate gold from other minerals, says the news release, “and toxic fumes created during the process are breathed in by workers and people living in the area. It is also poured onto the ground and seeps into the rivers.”

The report also provides an update on investigations into grave rights violations including extra-judicial killings and repression during protests against the Government of Nicolas Maduro since 2014, detailed in previous UN Human Rights Council-mandated investigations.

It notes the latest information from the country’s Attorney General indicating that from August 2017 to November 2019, probes were opened into 766 members of security forces, of whom 505 were charged, 390 detained and 127 convicted.

In the context of security operations, the OHCHR report explained how relatives had “regularly observed evidence of crime scenes having been manipulated” to suggest that the victim had confronted the security forces before being shot.

It also pointed to long delays in going to trial caused by the high turnover rate of prosecutors and judges, along with “political interference” in general.

“This situation has gravely affected the judiciary’s capacity to act independently to protect human rights and is contributing to impunity,” said OHCHR.

“Despite recent efforts made by the Office of the Attorney General to investigate human rights violations committed by security forces, the lack of accountability is especially significant in cases of killings in the context of protests and during security operations, as well as allegations of torture and ill-treatment and gender-based violence.”